One of the best ways to promote a women’s college, or a liberal arts education, is to seek out stories of some of the outstanding alumnae. One woman who stands out for her career success as well as her amazing contributions during the effort to “Save Sweet Briar” in the spring/summer of 2015, is Georgene Vairo, ’72. She was named Distinguished Alumna in 1997, and came back to campus to deliver a speech at the opening convocation. Here is what she wrote:
Georgene Vairo – Distinguished Alumna Speech 1997 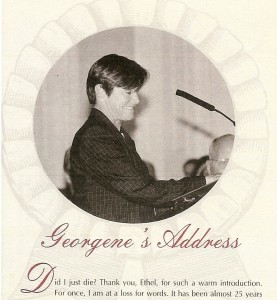 Launching a “Telling our Stories” Project…
Although some people think that women’s colleges are becoming obsolete, most alumnae of Sweet Briar College would sharply disagree. We believe that a single sex, liberal arts education has prepared us well to adapt to all sorts of challenges in a changing world and to become leaders in every imaginable field.
In order to better understand the sort of experiences that we had at Sweet Briar, we decided to create here a website, or digital archive, to showcase documents and photos published by the college or Alumnae Association (year books, alumnae magazines, etc.) over many decades. We also plan to record oral histories, gather memoirs, and make copies of letters and other memorabilia… from alumnae and others members of the Sweet Briar family. We are hoping to recruit volunteers to help us conduct interviews, dig through the archives, and coordinate efforts to gather stories from classmates, and then write up interesting articles on given themes. For example, someone might offer to gather stories about women who went to France for the junior year, or someone might tell about how the athletics offerings have changed over the years (before there were Vixens!) So, if you have a special idea for a story or a theme, please let us know. This is just a tiny seed for a project that could grow into a mighty tree!

Another lead story, appropriately, concerns a visit made by one of the most famous women in American history – Eleanor Roosevelt – who paid a visit to Sweet Briar in the late 1940s, when she was trying to drum up support for the United Nations. Of course she was a product of a women’s college, too. 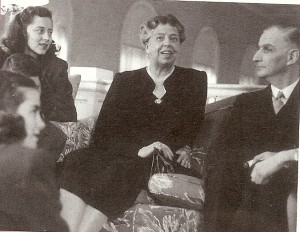 To this day, Jean Taylor ’49 and Eleanor Potts Snodgrass ’48 can still picture the former first lady and U.S. delegate to the United Nations, Eleanor Roosevelt, speaking before an overflow crowd in Sweet Briar’s Williams Gymnasium. “Mrs. Roosevelt,” says Jean, “was not prepared to give a speech. She came to the College expecting to talk with 12 to 15 members of the International Relations Club (IRC). She was not apprised of the change in plans until she got here.”
“Wayne Stokes Goodall ’48 reminded me that when she was on the International Relations Committee with [classmates] Jennie Belle Bechtel and Suzanne Hardy, someone said that Eleanor Roosevelt was going to Chatham Hall to speak,” recalls Eleanor. “Wayne wrote to her and asked her to come to Sweet Briar first. Mrs. Roosevelt accepted, so Martha von Briesen ’31, SBC’s director of public relations, sent lots of publicity to local newspapers. Wayne and I remember that the gym was packed with people from Lynchburg and the surrounding area, and that Suzanne Hardy gave an excellent introduction.”
“We were all so impressed,” added Jean. “She walked to the podium and gave an eloquent, impromptu speech about the role of the United Nations and the United States in the world. The place was jam-packed – hundreds of us were crowded in there – but she took it in stride. It was one of those moments you never forget.”
“During lunch in the Refectory,” continues Eleanor, “Wayne and Suzanne had the pleasure of sitting next to Mrs. Roosevelt and thoroughly enjoyed her. After lunch, Miss Glass’ chauffeur drove her to Chatham Hall.”

We would like to encourage former students to do a little creative writing, and share your stories…about life on campus, or perhaps, about how you benefited from a liberal arts education. For starters, here is an essay I wrote just a few months ago. I hope others will offer to share similar stories and let us post them here…My Liberal Arts Education 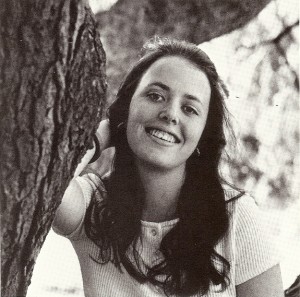