Editorial from the Brambler, a student literary publication…from the 1930s

“There is something in the loveliness of this place that should remain with us for the rest of our lives.” 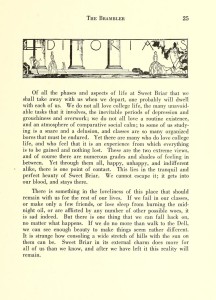 Posted in Research Tips | Comments Off on Editorial from the Brambler, a student literary publication…from the 1930s

Part four – Talk given by Bobby Waid, Mayor of Fincastle

In this final segment of our talk with Bobby Waid, Mayor of Fincastle, Bobby talks about how the parish finally began to grow, and of their decision to pay back the diocese the money they had borrowed to build the parish house ( back in 1966)…  He then expressed his gratitude for being invited to give this talk.

We would also like to think Bobby for his time, and for allowing us to video tape this interview.

Part Three – Talk Given by Bobby Waid, Mayor of Fincastle

In this segment of our Video Interview, Bobby Waid lists off all the families who were members of St. Mark’s church…and tells of how everyone was expected to do something useful.  He was expected to become a member of the vestry as soon as he reached the age of eighteen.  One of his funniest stories concerns parishioner who took his son along on a trip to New York City, but left him there by mistake.  Another good story…is about a loud conversation between two parishioners who were hard of hearing.

Part two – Talk Given by Bobby Waid, Mayor of Fincastle

In Part two of our video interview series with Bobby Waid, Mayor of Fincastle, Bobby starts telling about the church organist, Viola Painter, and of her custom of leaving the church at the end on one hour (often before the final hymn) to be sure to arrive over at the Presbyterian Church on time for their Sunday service.

He also tells a funny story about his attempt to be a lay reader, and his poor pronunciation of the Biblical names….And he explains about how they heated the church, back in the day.

Part One – Talk given by Bobby Waid, Mayor of Fincastle

As part of a project to collect oral histories from some of our older residents, the Episcopal Church Women (ECW) of St. Mark’s Episcopal, in Fincastle, invited Bobby Waid, Mayor of Fincastle and lifelong resident of the town, to speak about his memories of the church.

He started out by telling about the construction of the first building (Established Church), now owned by the Presbyterians, and then about what happened after the Presbyterians took it over…  With his characteristic humor and colorful language, the Mayor reminisces about the long list of clergy who served at the church, even during the days when services were only held once a month!

Join us this month for our four part series of this great interview with Bobby Waid.